Abstract: Virtual reality drawing applications let users draw 3D shapes using brushes that form ribbon shaped, or ruled-surface, strokes. Each ribbon is uniquely defined by its user-specified ruling length, path, and the ruling directions at each point along this path. Existing brushes use the trajectory of a handheld controller in 3D space as the ribbon path, and compute the ruling directions using a fixed mapping from a specific controller coordinate-frame axis. This fixed mapping forces users to rotate the controller and thus their wrists to change ribbon normal or ruling directions, and requires substantial physical effort to draw even medium complexity ribbons. Since human ability to rotate their wrists continuously is limited, the space of ribbon geometry users can comfortably draw using these brushes is limited. These brushes can be unpredictable, producing ribbons with unexpectedly varying width or flipped and wobbly normals in response to seemingly natural hand gestures. Our AdaptiBrush ribbon brush system dramatically extends the space of ribbon geometry users can comfortably draw while enabling users to accurately predict the ribbon shape that a given hand motion produces. We achieve this by introducing a novel adaptive ruling direction computation method, enabling users to easily change ribbon ruling and normal orientation using predominantly translational controller, and thus wrist, motion. We facilitate ease-of-use by computing predictable ruling directions that smoothly change in both world and controller coordinate systems, and facilitate ease-of-learning by prioritizing ruling directions which are well-aligned with one of the controller coordinate system axes. Our comparative user studies confirm that our more general and predictable ruling computation leads to significant improvements in brush usability and effectiveness compared to all prior brushes; in a head to head comparison users preferred AdaptiBrush over the next-best brush by a margin of 2 to 1. 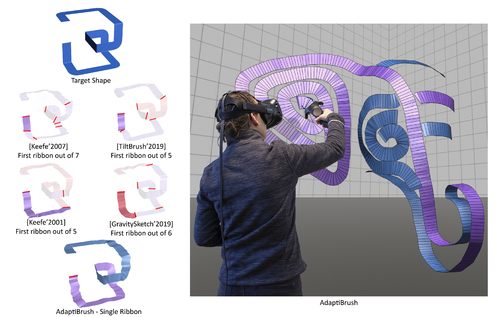 Abstract: We introduce inverted stippling, a method to mimic an inversion technique used by artists when performing stippling. To this end, we extend Linde-Buzo-Gray (LBG) stippling to multi-class LBG (MLBG) stippling with multiple layers. MLBG stippling couples the layers stochastically to optimize for per-layer and global blue-noise properties. We propose a stipple-based filling method to generate solid color backgrounds for inverting areas. Our experiments demonstrate the effectiveness of MLBG; users prefer our inverted stippling results compared to traditional stipple renderings. In addition, we showcase MLBG with color stippling and dynamic multi-class blue-noise sampling, which is possible due to its support for temporal coherence. 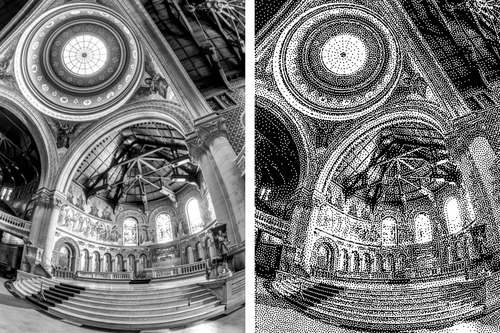 Abstract: Feature lines visualize the shape and structure of 3D objects, and are an essential component of many non-photorealistic rendering styles. Existing feature line rendering methods, however, are only able to render feature lines in limited contexts, such as on immediately visible surfaces or in specular reflections. We present a novel, path-based method for feature line rendering that allows for the accurate rendering of feature lines in the presence of complex physical phenomena such as glossy reflection, depth-of-field, and dispersion. Our key insight is that feature lines can be modeled as view-dependent light sources. These light sources can be sampled as a part of ordinary paths, and seamlessly integrate into existing physically-based rendering methods. We illustrate the effectiveness of our method in several real-world rendering scenarios with a variety of different physical phenomena.

Abstract: We introduce SketchGNN, a convolutional graph neural network for semantic segmentation of freehand vector sketches. We treat a sketch as a graph, with nodes representing the sampled points and edges encoding the stroke structure information.