Abstract: The intricate motions and complex vortical structures generated by the interaction between fluids and solids are visually fascinating. However, reproducing such a two-way coupling between thin objects and turbulent fluids numerically is notoriously challenging and computationally costly: existing approaches such as cut-cell or immersed-boundary methods have difficulty achieving physical accuracy, or even visual plausibility, of simulations involving fast-evolving flows with immersed objects of arbitrary shapes. In this paper, we propose an efficient and versatile approach for simulating two-way fluid-solid coupling within the kinetic (lattice-Boltzmann) fluid simulation framework, valid for both laminar and highly turbulent flows, and for both thick and thin objects. We introduce a novel hybrid approach to fluid-solid coupling which systematically involves a mesoscopic double-sided bounce-back scheme followed by a cut-cell velocity correction for a more robust and plausible treatment of turbulent flows near moving (thin) solids, preventing flow penetration and reducing boundary artifacts significantly. Coupled with an efficient approximation to simplify geometric computations, the whole boundary treatment method preserves the inherent massively parallel computational nature of the kinetic method. Moreover, we propose simple GPU optimizations of the core LBM algorithm which achieve an even higher computational efficiency than the state-of-the-art kinetic fluid solvers in graphics. We demonstrate the accuracy and efficacy of our two-way coupling through various challenging simulations involving a variety of rigid body solids and fluids at both high and low Reynolds numbers. Finally, comparisons to existing methods on benchmark data and real experiments further highlight the superiority of our method. 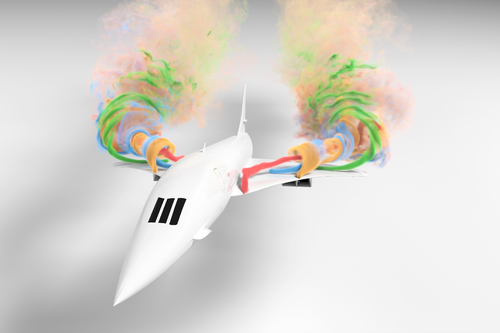 Abstract: We propose FrictionalMonolith, a monolithic pressure-friction-contact solver for more accurately, robustly, and efficiently simulating two-way interactions of rigid bodies with continuum granular materials or inviscid liquids. By carefully formulating the components of such systems within a single unified minimization problem, our solver can simultaneously handle unilateral incompressibility and implicit integration of friction for the interior of the continuum, frictional contact resolution among the rigid bodies, and mutual force exchanges between the continuum and rigid bodies. Our monolithic approach eliminates various problematic artifacts in existing weakly coupled approaches, including loss of volume in the continuum material, artificial drift and slip of the continuum at solid boundaries, interpenetrations of rigid bodies, and simulation instabilities. To efficiently handle this challenging monolithic minimization problem, we present a customized solver for the resulting quadratically constrained quadratic program that combines elements of staggered projections, augmented Lagrangian methods, inexact projected Newton, and active-set methods. We demonstrate the critical importance of a unified treatment and the effectiveness of our proposed solver in a range of practical scenarios. 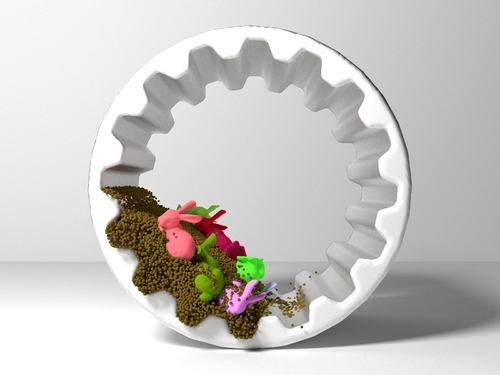 Abstract: Predicting intricate details of a turbulent flow field in both space and time from a coarse input remains a major challenge despite the availability of modern machine learning tools. In this paper, we present a simple and effective dictionary-based approach to spatio-temporal upsampling of fluid simulation. We demonstrate that our neural network approach can reproduce the visual complexity of turbulent flows from spatially and temporally coarse velocity fields even when using very few generic training sets. Moreover, since our method generates finer spatial and/or temporal details through embarrassingly-parallel upsampling of small local patches, it can efficiently handle upsampling across a variety of grid resolutions. As a consequence, our method offers a whole range of applications varying from fluid flow upsampling to fluid data compression. We test our method on a series of complex examples, highlighting dramatically better results in spatio-temporal upsampling and flow data compression than existing methods as assessed by both qualitative and quantitative comparisons, demonstrating the efficiency and generalizability of our method for synthesizing turbulent flows. 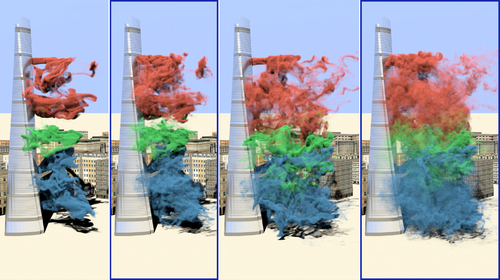 Ships, Splashes, and Waves on a Vast Ocean

Abstract: The simulation of large open water surface is challenging using a uniform volumetric discretization of the Navier-Stokes equations. Simulating water splashes near moving objects, which height field methods for water waves cannot capture, necessitates high resolutions. Such simulations can be carried out using the Fluid-Implicit-Particle (FLIP) method. However, the FLIP method is not efficient for the long-lasting water waves that propagate to long distances, which require sufficient depth for a correct dispersion relationship. This paper presents a new method to tackle this dilemma through an efficient hybridization of volumetric and surface-based advection-projection discretizations. We design a hybrid time-stepping algorithm that combines a FLIP domain and an adaptively remeshed Boundary Element Method (BEM) domain for the incompressible Euler equations. The resulting framework captures the detailed water splashes near moving objects with the FLIP method, and produces convincing water waves with correct dispersion relationships at modest additional costs.

Abstract: We introduce a fast, expressive method for simulating fluids over radial domains, including discs, spheres, cylinders, ellipses, spheroids, and tori. We do this by generalizing the spectral approach of Laplacian Eigenfunctions, resulting in what we call spiral-spectral fluid simulations. Starting with a set of divergence-free analytical bases for polar and spherical coordinates, we show that their singularities can be removed by introducing a set of carefully selected enrichment functions. Orthogonality is established at minimal cost, viscosity is supported analytically, and we specifically design basis functions that support scalable FFT-based reconstructions. Additionally, we present an efficient way of computing all the necessary advection tensors. Our approach applies to both three-dimensional flows as well as their surface-based, co-dimensional variants. We establish the completeness of our basis representation, and compare against a variety of existing solvers. 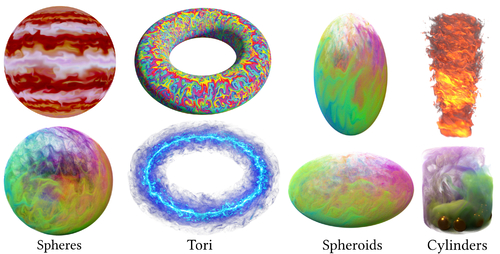