Abstract: We present a learning-based approach to generate binaural audio from mono audio using multi-task learning. Our formulation leverages additional information from two related tasks: the binaural audio generation task and the flipped audio classification task. Our learning model extracts spatialization features from the visual and audio input, predicts the left and right audio channels, and judges whether the left and right channels are flipped. First, we extract visual features using ResNet from the video frames. Next, we perform binaural audio generation and flipped audio classification using separate subnetworks based on visual features. Our learning method optimizes the overall loss based on the weighted sum of the losses of the two tasks. We train and evaluate our model on the FAIR-Play dataset and the YouTube-ASMR dataset. We perform quantitative and qualitative evaluations to demonstrate the benefits of our approach over prior techniques. 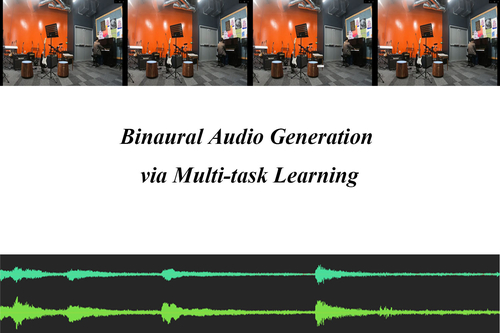 Abstract: Holographic near-eye displays promise unprecedented capabilities for virtual and augmented reality (VR/AR) systems. The image quality achieved by current holographic displays, however, is limited by the wave propagation models used to simulate the physical optics. We propose a neural-network-parameterized plane-to-multiplane wave propagation model that closes the gap between physics and simulation. Our model is automatically trained using camera feedback and it outperforms related techniques in 2D plane-to-plane settings by a large margin. Moreover, it is the first network-parameterized model to naturally extend to 3D settings, enabling high-quality 3D computer-generated holography using a novel phase regularization strategy of the complex-valued wave field. The efficacy of our approach is demonstrated through extensive experimental evaluation with both VR and optical see-through AR display prototypes. 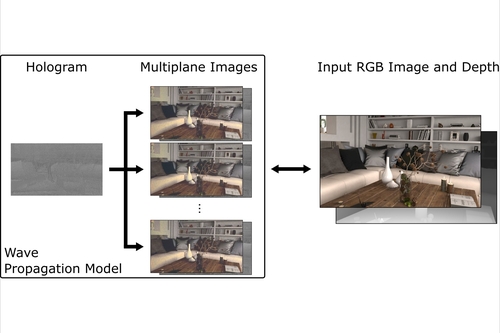 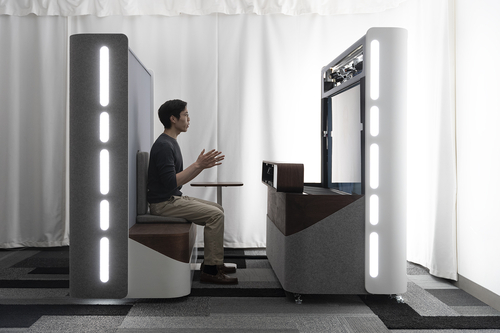 Abstract: With well-established methods for producing photo-realistic results, the next big challenge of graphics and display technologies is to achieve perceptual realism --- producing imagery indistinguishable from real-world 3D scenes. To deliver all necessary visual cues for perceptual realism, we built a High-Dynamic-Range Multi-Focal Stereo Display that achieves high resolution, accurate color, a wide dynamic range, and most depth cues, including binocular presentation and a range of focal depth. The display and associated imaging system have been designed to capture and reproduce a small near-eye three-dimensional object and to allow for a direct comparison between virtual and real scenes. To assess our reproduction of realism and demonstrate the capability of the display and imaging system, we conducted an experiment in which the participants were asked to discriminate between a virtual object and its physical counterpart. Our results indicate that the participants can only detect the discrepancy with a probability of 0.44. With such a level of perceptual realism, our display apparatus can facilitate a range of visual experiments that require the highest fidelity of reproduction while allowing for the full control of the displayed stimuli. 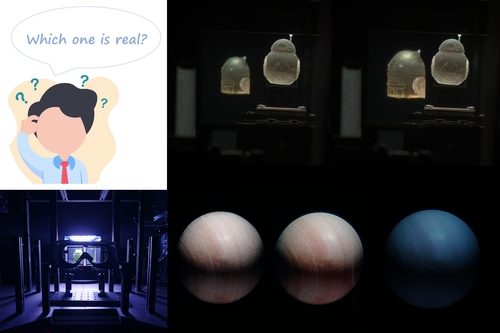 Abstract: As virtual reality (VR) devices become increasingly commonplace, asymmetric interactions between people with and without headsets are becoming more frequent. Existing video pass-through VR headsets solve one side of these asymmetric interactions by showing the user a live reconstruction of the outside world. This paper further advocates for reverse pass-through VR, wherein a three-dimensional view of the user's face and eyes is presented to any number of outside viewers in a perspective-correct manner using a light field display. Tying together research in social telepresence and copresence, autostereoscopic displays, and facial capture, reverse pass-through VR enables natural eye contact and other important non-verbal cues in a wider range of interaction scenarios, providing a path to potentially increase the utility and social acceptability of VR headsets in shared and public spaces. 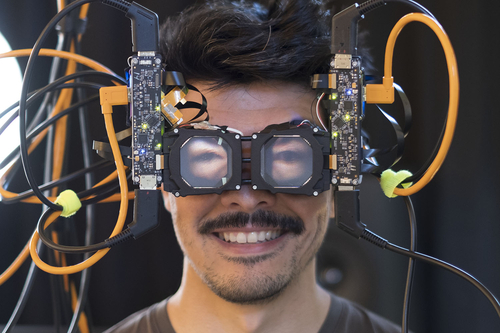