All 19 presentations are accessible on-demand in the virtual platform from 6 December 2021 to 11 March 2022.
Out of which, 13 Emerging Technologies will have physical exhibits onsite in Hall E, Tokyo International Forum from 15 - 17 December 2021.
Live demonstrations and Q&As for the respective presentations will be taking place at the specified Date/Time below.

Takahiro Harada is a researcher and the architect of a GPU global illumination renderer called Radeon ProRender at AMD. At the same time, he’s leading software development in Morgenrot, Inc. He developed Forward+ and GPU rigid body simulation solver, which is used as a base of the Bullet physics engine OpenCL implementation. Before joining AMD, he engaged in research and development on real-time physics simulation on PC and game consoles at Havok. Before coming to the industry, he was in academia as an assistant professor at the University of Tokyo, where he earned his Ph.D. in Engineering.

Yusuke Takeda is a postdoctoral fellow at the Department of Earth and Planetary Science, Hokkaido University. He also works as a researcher at The Hokkaido University Museum and The University Museum, The University of Tokyo. His current research interests are processing and visualization of large-size image sequence data acquired from various tomographic devices. He has also developed a multi-dimensional petrographic imaging system. His academic career started as a paleontologist focusing on ammonite fossils. He received his Ph.D. degree at the University of Tokyo in 2017.

Yasuhiro Iba is an associate professor at the Department of Earth and Planetary Sciences, Hokkaido University. His current research interest is the development of high-resolution tomography systems for paleobiology and astrobiology. He received his Ph.D. degree at the University of Tokyo in 2008. 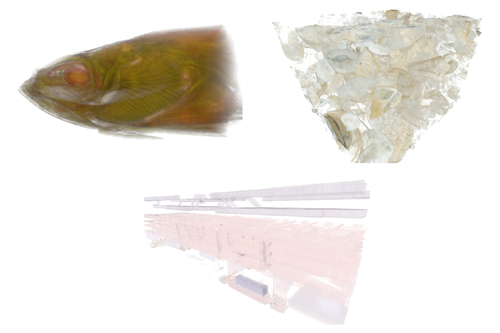