Lecturer(s):
Yuya Takahashi, TOEI ANIMATION CO, LTD., Japan
Yuya entered Toei Animation CO, Ltd. in 2007 as a director and digital coordinator. His main work include the TV series “ONE PIECE”, “Oshiri Tantei”, “Kado: The Right Answer” the movies “Pop in Q” and “Asura”. On the side of his direction work, he is one of the main evangelists of the digital transformation of the animation world in Japan.

Marc Salvati, OLM Digital, Inc., Japan
Marc came to Japan in 2004 as a Computer Graphics PhD student at the Tokyo Institute of Technology. He made his whole career at the research and development department of OLM Digital, Inc since 2008. He started as a software engineer and developed various plugins for Maya and After Effects. Now directs a team of developers and researchers covering all OLM Digital needs in CG and traditional animation.

Description: Most western animation companies embraced Computer Graphics (CG). With CG advancing, the traditional hand-drawn feeling faded away. Only recently, movies like “Spider-Man: Into the Spider-Verse” saw the comeback of a hand-drawn feeling in the well established CG production industry. Hand-drawn animation however remains the foundation of most Japanese productions. To reduce the production cost of complex mechanical animations and fancy camera moves CG was initially introduced only for vehicles, robots and background shots. This required seamless integration with hand-drawn animation. Nowadays CG is even starting to be used for character animation. Past years have seen many improvements in making CG characters look just like their hand-drawn counterparts. In this course we start by sharing the traditional techniques and workflows of Japanese animation, and how they evolved with the rise of CG. Then we explain in detail how to efficiently create robots and how to render their contours and cel look to mimic Japanese hand-drawn animation. We will end by presenting some of the key challenges attempting to recreate a hand-drawn look with a full CG production, in particular elements like hair, eyes and shadows. The content of the course is illustrated using recent productions such as “Butt Detective”, “Zoid Wild”, “Pacific Rim: The Black”, “Baymax & Mochi”, “Knights of Sidonia”, “Levius”, “Human Lost”, “Ajin”, “Drifting Dragons” and “Ronja, the Robber's Daughter”. 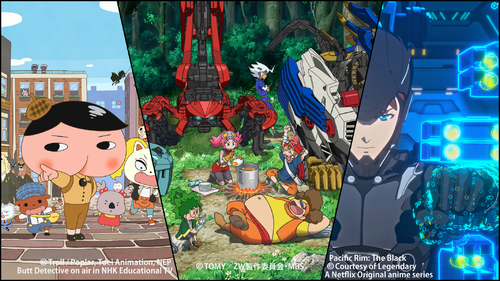