Lecturer(s):
Stelian Coros, ETH Zürich, Switzerland
Stelian is an Assistant Professor in the Department of Computer Science at ETH Zurich, where he leads the Computational Robotics Lab. He is also an Adjunct Professor in the Robotics Institute at Carnegie Mellon University. Having obtained his PhD in Computer Science from the University of British Columbia in 2011, Stelian joined Disney Research Zurich, where he led the research group on computational robotics. The overarching goal of Stelian’s research is to enable robots to understand the physical world and the physical implication of their actions. Specific focus areas include robotic mobility, dexterous manipulation, and bioinspired robots.

Bernhard Thomaszewski, ETH Zürich, Université de Montréal, Switzerland
Bernhard is a Senior Research Scientist at ETH Zürich and an adjunct Professor at the University of Montreal. After obtaining his PhD in 2010, Bernhard joined Disney Research Zurich. He then moved on to the University of Montreal, where he was an associate Professor. Bernhard is the recipient of the Outstanding Young Researcher Award (2018) from the Canadian Society for Computer Science and the NSERC Research Chair on Computational Design for Digital Manufacturing (2019). For the past ten years, Bernhard's research has focused on differentiable simulation for computational design with applications to flexible structures, compliant mechanisms, and mechanical assemblies.

Miles Macklin, NVIDIA Research, New Zealand
Miles Macklin is a Research Scientist at NVIDIA working on physical simulation. He received a Ph.D. in Computer Science from the University of Copenhagen advised by Prof. Kenny Erleben. His work spans physics-based animation and robotics, and aims to develop robust and efficient simulation methods for contact-rich multiphysics scenarios. He has published methods for sim-to-real transfer, and parameter estimation using differentiable simulation, and is interested in how we can leverage GPUs to efficiently compute gradients of simulation outputs. His research has been integrated into many commercial products including NVIDIA's PhysX and Isaac simulation platforms.

Nils Thuerey, Technische Universität München (TUM), Germany
Nils is an Associate Professor at the Technical University of Munich (TUM). He focuses on physics-based animation and deep-learning methods for physical systems. He obtained a Ph.D. for his work on liquid simulations in 2006 from the University of Erlangen-Nuremberg. Until 2010 he was a post-doctoral researcher at ETH Zurich. Nils received a tech-Oscar in 2013 for his research on controllable smoke effects. Before joining TUM in 2013, he was R&D lead at ScanlineVFX. Currently, he is especially interested in how to achieve tight and seamless integrations of learning algorithms with numerical methods, e.g. via differentiable physics simulations.

Description: Differentiable simulation is emerging as a fundamental building block for many cutting-edge applications in computer graphics, vision and robotics, among others. This course provides an introduction to this topic and an overview of state-of-the-art methods in this context. Starting with the basics of dynamic mechanical systems, we will present a general theoretical framework for differentiable simulation, which we will specialize to rigid bodies, deformable solids, and fluids. A particular focus will be on the different alternatives for computing simulation derivatives, ranging from analytical expressions via sensitivity analysis to reverse-mode automatic differentiation. As an important step towards real-world applications, we also present extensions to non-smooth phenomena such as frictional contact. Finally, we will discuss different ways of integrating differentiable simulation into machine learning frameworks. The material covered in this course is based on the author's own works and experience, complemented by a state-of-the-art review of this young but rapidly evolving field. It will be richly illustrated, annotated, and supported by examples ranging from robotic manipulation of deformable materials to simulation-based capture of dynamic fluids. The theoretical parts will be accompanied by source code examples that will be made available to participants prior to this course. 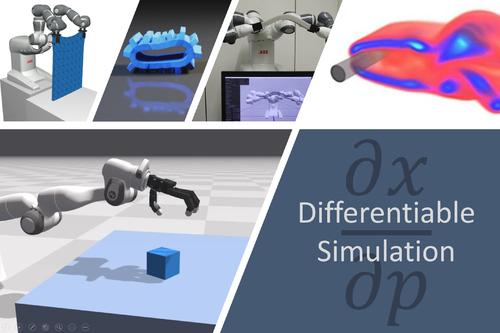